Halong Bay – a natural wonder of the world – is well-known not only for beautiful beaches, clear blue water mixed with the limestone mountains of all shapes but also for the caves formed by stalactites for tens of millions of years, expressing gorgeous and enchanting beauty. Indeed, it is the castle of creation in the world. Let’s discover the most beautiful bays in Halong Bay now!

Thien Cung cave (or Heaven cave) is considered as the largest and most beautiful of the caves in Halong Bay that people discovered. It is also located near Dau Go cave, together creating a cluster of destinations that always attract several customers. It has been shaping since the late Pleistocene that was about 2 million years ago and was discovered in 1993.

The way to discover Thien Cung, Halong is along the cliffs, and trees cover the two sides. Through a narrow gate, the cave opens a vast space, extending nearly 130 meters. The deeper the tourists get into, the more surprised they are by the beauty of the splendor created by the diversity of stalactites.

Thien Cung cave’s width is nearly 10,000 square meters, which has a complex structure, consisting of different levels and compartments with high ceilings and walls. In the cave, tourists can see many stalactites and stalagmites with various unique shapes. Surprisingly, from the ceiling, each cluster of stalactites has poured down to form the lively and sparkling magic stone curtain. 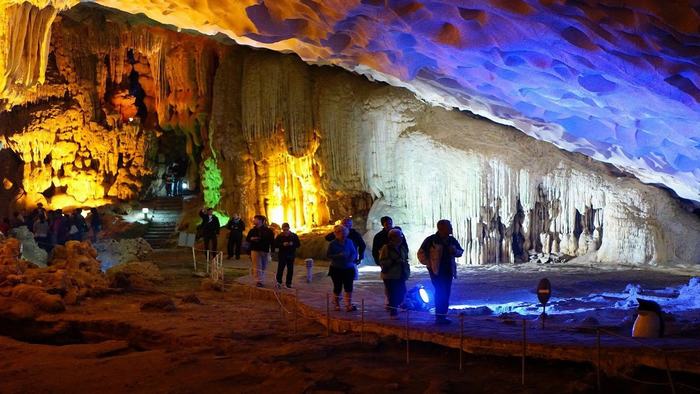 The walls in the cave look like massive artworks, with curvy and soft lines to every detail. In the center of the cave, there are four pillars as a symbol of nature support. From the foot to the top are engraved shapes such as birds, fish, scenes of human activities, plants and flowers that show the harmony of emotional life between human beings and animals. Interestingly, all of them are created by nature. Under the high arch of Thien Cung cave, each cluster of green stalactites as pearl covered falls to form a magnificent natural curtain that makes visitors feel like they are in the middle of a majestic and beautiful castle.

Going to the deepest compartment, visitors can admire the natural light flashing through the ceiling, creating a unique luxuriant view. There is also a stream of water flowing from the mountain, blocking in all seasons and clustering into a bright and pure lake. At the corners, Thien Cung also accesses to the cool space outside through a small hole, overlooking the green Halong Bay.

A legend under the beauty of Thien Cung Cave

The Thien Cung cave story was attached to the Dragon King of Vietnam a long time ago. In particular, this was where the Dragon King returned after helping people defeat the foreign invaders. Afterward, people became sick and hungry because of the massive drought. They decided to send somebody to the Dragon King to ask for help. Not afraid of danger, a young couple determined to go together to find him.

Through thousands of trials and tribulations, the couple finally found the Heaven Cave and met the Dragon King, who then helped them harmonize the weather. Right at that time, their daughter was born and named “Cloud.” As she had grown up, she disturbed the Dragon Prince's heart, and their love started to flourish. Their wedding was held for seven days and seven nights inside the cave. 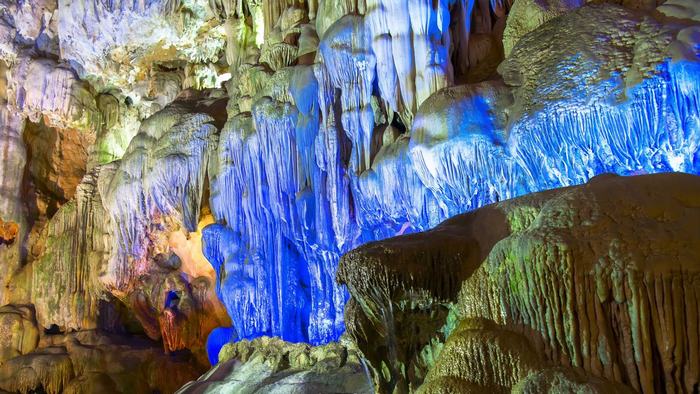 Participating in the happy days of the couple, the dragons were flying in the stalactite clouds, the pythons were wrapping themselves around the old trees, the lions were excitedly dancing, the Eagles were spreading their giant wings, and the elephants were lying down for the bride and groom to step down. The Southern Cross (the god who records all human births), The Great Bear (the god who records all human deaths) and the angels were also singing. All of them were creating a jubilant and bustling scene in the heart of Thien Cung cave.

TIP: Thien Cung cave is located in the north of Wooden Head island at an altitude of 25m above sea level, far about 4km from the Bai Chay port. Therefore, if you plan to discover Thien Cung cave, Halong, don’t forget to visit other well-known destinations like Wooden Head island and Bai Chay beach. Along with Heaven, Wooden Head cave also has beautiful and impressive scenery concealing historical legends. Arriving Bai Chay beach, you will experience a number of the best seafood and the most convenient services with plenty of resorts and restaurants here. TheHalong Bay Tours will provide you a tour schedule including all the famous destinations in the region.

Discovering Thien Cung cave, Halong, you will feel like you have just admired an extraordinarily elaborate and unique museum of art created by the hand of nature that is gorgeous to every small detail. If you want to know more about Halong Bay tours, we are honored to suggest and recommend useful information, so contact us every time you need. Please like and share with the others. Thank you and see you around.