If you are a fan of a moving yet sad love story, you should not ignore the legend of the Trinh Nu cave.

Besides that, it also brings a different color that other caves in Halong Bay don’t have, becoming a highlight in the majestic bay of Halong.

You’ll find all about Trinh Nu cave in this article. From that, we hope your trip to the cave will be more comfortable thanks to our guide of ways to get here.

Where is Trinh Nu cave?

Halong is known for its rocky islands with strange shapes, and stalactites shimmering inside caves. Besides, visitors coming to Halong Bay also know the nature here with legends that are handed down in folk. 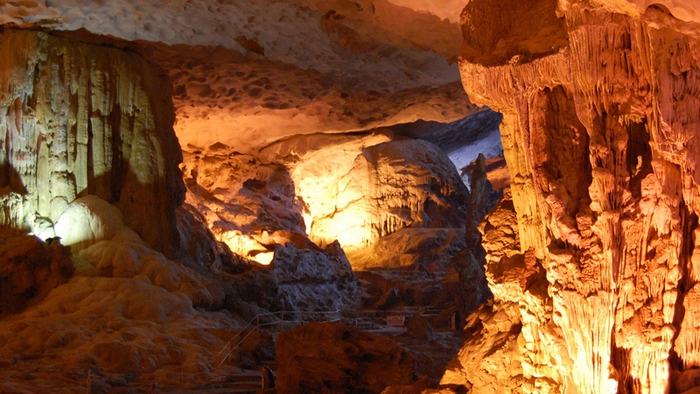 Trinh Nu cave not only has many stalactites and beautiful scenes but also attracts tourists because of a very moving story. In the cave, there is a horizontal rock that looks like a girl lying with her hair and stretching out to the sea. So, it is called the Trinh Nu cave, or Virgin cave.

The legend of Trinh Nu cave

There was a beautiful fishing girl. Her family was poor that they had to work for an owner of the fishing area. The landlord forced her to be his wife but she refused because she had a lover.

Unable to do anything, he sent her to an uninhabited island. On a rainy night, the girl turned into a stone. That was the night her boyfriend knew that she was in trouble and sailed to find her.

At night, thunderstorms hit the boat, making him wash up on a deserted island. In the lightning light, he recognized the girl on another island but his words were taken away by the wind. He hit the cliff with a rock to told her that he had arrived until the blood on his hands dripped. Then, he was exhausted and petrified in this Drum cave.

When entering the cave, in front of the cave is impressed with the image of the girl lying down with the long hair, the eyes looking out to the sea, evoking a sadness as if waiting for something. The eyes are said to be heading towards the cave where the girl’s lover is resting.

Therefore, the tourists come to the cave of the Virgin and the Trong Cave cannot only admire the stalactites and beautiful sight but also hear people here tell the tragic love story of this young couple.

The vestiges of the hurricane that night still exist today. Those are the crumbling earth in the cave, the sound of the wind roaring over the cliffs, and the foam waves rippling up.

For fishers, they consider the Virgin cave as their beloved home while many couples considered it as a symbol of the oath of love. The French gave the cave the name Le virgin (Girls’ cave). 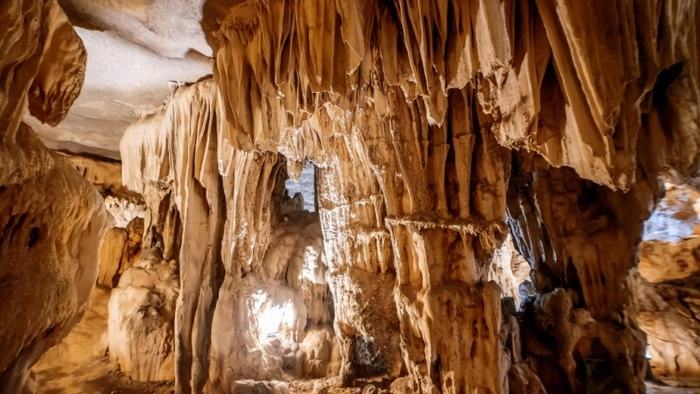 Outside the cave, lush vegetation covers the top of the rocky cliffs to the foot of the cave. The sea areas between the Trinh Nu cave and Trong cave are very calm, blue and picturesque.

Overlooking the outside, visitors can see the scenery of Halong Bay in the distance and the peaceful atmosphere, making their soul relaxed. Because of such beautiful scenery, Trinh Nu cave has become famous in Halong tourism.

Besides the legend of a love story, Trinh Nu cave is also one of the archaeological relics in Halong Bay.

In 2000, archaeologists discovered vestiges of prehistoric inhabitants of Halong Culture (about 4,000 years ago) in the cave such as ashes, animal bones, ceramic fragments, and stone objects.

In 2010, archaeologists also discovered the vestiges of an ancient ceramic wharf in the area in front of Trinh Nu cave with many pieces of pottery, crockery (mainly crockery cans), jars of many kinds with parallel decorative patterns or wave-shape patterns. Fragments of bowls and plates were identified under the Tran Dynasty (XIII-XIV century), ceramic pieces of Le dynasty pottery (XVI-XVIII century), and many ceramic fragments of Chinese feudal dynasties.

Based on the results of the survey, archaeologists believe that Trinh Nu cave is an ancient ceramic wharf monument in the ancient Van Don port system, even though this is a small and infrequent wharf.

Trinh Nu cave is indeed a majestic paradise on the dreaming beauty of Halong Bay. If you have a chance to visit here, don’t miss out on traveling to the cave. For further information about Halong bay cruise tours, feel free to contact us or visit our website. Please like and share the article with others if you find it useful. Thank you.