Along with the beautiful and peaceful beaches, the system of caves and grottos formed from tens of millions years ago under the great limestone mountains has awarded Halong Bay a fame as the UNESCO World Heritage Site. Every tourist who has traveled to Halong Bay once knows the Dau Go cave (or Wooden Head cave) locating on Dau Go island, next to Heaven cave, 6 kilometers from Bai Chay port.

The Ancient and Vivid Beauty of Dau Go Cave

Dau Go cave has the large width of approximately 5,000 kilometers. Dau Go is located at an altitude of 27 meters above sea level, and it has the same age as the Heaven Cave - from the late Pleistocene period of about 2 million years ago. The cave contains natural scape of complicated ancient architectures.

Dau Go cave expresses a beautiful, ancient and peaceful space with many stone pillars and small stalactites, soaring as to reach the sky. The cave has a wide variety of plants and animals. Halong Bay is famous for a number of caves and grottos such as Heaven cave, Trinh Nu cave, Sung Sot cave, but none of them has the abundant vegetation like Dau Go cave. Due to the wide opening of the cave door, the humidity inside the cave and the effect of sunlight are high, it can be seen immediately the diversity of the flora, especially mosses, ferns, and woody plants. This is a distinctive feature of Dau Go in the whole system of many caves in Halong Bay. 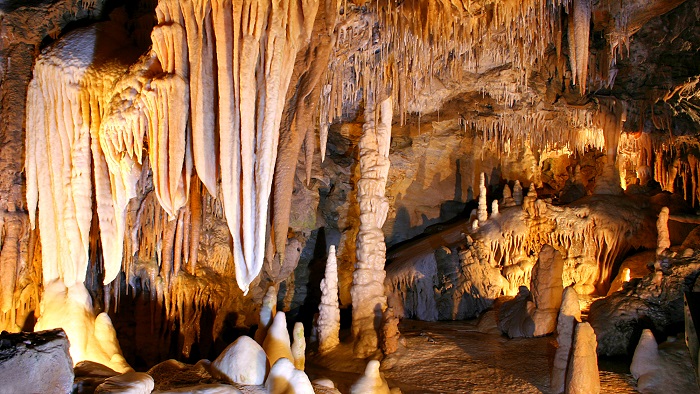 Exploring Dau Go cave, Halong, tourists must go through 3 compartments. Entering the first one, tourists can admire a vaulted porch filled with natural light, where the ceiling is like a giant oil painting, which depicts an immense natural landscape. The stalactites system here with many stalactites hanging down has distinct images which are familiar to natural life: lions, pythons, turtles, and even the image of the fighting-cock couple, etc. With their rich imagination, visitors will see the stalactites appearing as a group of elephants which are on their way to eat, or the uniqueness of a lion sleeping, etc. All of those miracles make a very special feature for the cave that visitors would surprise as they are lost in a castle with an ancient, majestic and massive architecture.

Exploring deeper in the second place, visitors must walk through a narrow slit, where the light shines through the blurred scene. All of them looks like a mysterious and monumental painting including the images of the small rocky islands undulating on the water. They are clearly depicted in this picture. The stalactite flowers are hidden making visitors feel scared and curious as well.

In the final destination, visitors will be surprised by the sudden extension of the cave, in which a fresh well flowing in all seasons appears. There is also the image of the giant but soft stone columns which have over 20 meters in width. A French author used to call this cave as “Grotte des Merveilles” which meant “Cave of Wonders”.

The Origin of the weird name Dau Go

There are 3 different explanations for this cave’s name according to the local documents and the folklore. 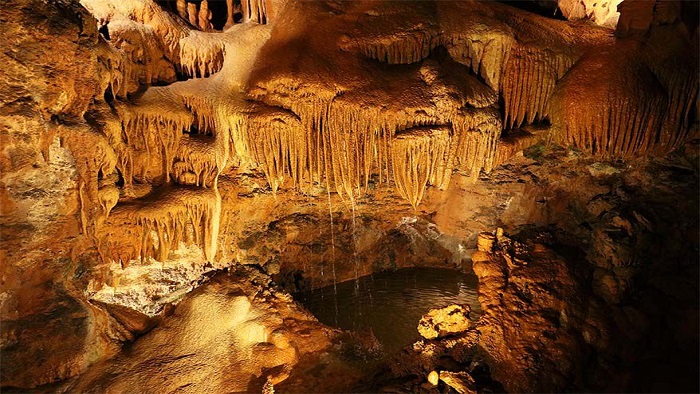 In the first story, being told from the tradition through the narrative of the local and elderly people, Dau Go cave was first called Giau Go cave (or Hidden Wood cave), as it was associated with the historical story. In the resistance war against Mongol invaders in the 13th century commanded by Tran King, this was the place where the Tran soldiers hid wooden stakes before bringing them down to the Bach Dang River (Yen Hung) to build the battlefield of wooden piles in order to destroy the enemy’s ships. This story explains the unique Vietnamese name of the cave, reminding people of the outstanding military glory of Tran troops and people against the Mongol invaders over 7 centuries ago. For the time being, people have still handed down the folk song: "Hong Gai has Bai Tho Mountain/ Dau Go Cave with Long Tien Temple".

The second theory explains that Dau Go island cluster is shaped like a bow, creating in front of Dau Go cave an enclosed area in which wind blows all year round, so in the past, the fishermen often gathered on the stormy days, and after a long time of fishing, the crowd anchored in the island to live here, repaired fishing boats. Therefore, until now, there are still many wooden remaining. Probably the name of Dau Go began from this incident.

The final theory explains that because the cave is located on the island which looks like a giant wooden tree, Dau Go was named based on the shape of the island.

Dau Go is known as the most beautiful cave in Halong Bay with its majestic natural beauty and unique myth. Therefore, coming with Halong Bay tour, don’t miss a trip of exploring Dau Go cave, Halong that brings the beauty of wild nature with a number of engaging stalactites. If our suggestions are useful for you, please like and share with others. Thank you and hope to see you around.

NAVIGATE Why you should consider a vacation in Dau Go Cave