Visitors traveling to the Halong tours in Cat Ba not only to bathe, dive, and enjoy the unique seafood but also want to admire the famous caves in the island.

In recent years, the cave tourism in Cat Ba has become a product attracting more and more tourists and tour operators organizing Cat Ba cave tours for travelers to visit, becoming the indispensable highlight in the journey.

Trung Trang is one of the largest valleys in Cat Ba island with about 300 hectares of an area covering and 10-30 meters below the sea level, 15 kilometers northwest of Cat Ba town. Over millions of years of history, Trung Trang cave is one of the masterpieces that nature offers exclusively for Cat Ba tourism. The cave has a length of about 300 meters through the mountains, which can welcome up to hundreds of visitors at a time that very few other caves can afford.

Trung Trang cave has a surprisingly large number of stalactites which have various unique shapes, sparkling like many blocks of jewels. There are also standing spectacular stones with more than a dozen parallel plates. When taping the stones with the bare hand, we can hear the echo from very far away. Besides the beautiful rocks, the cave also has a poetic forest of the natural nageia fleuryi. It is not only valuable in economic but also valuable in scientific research. 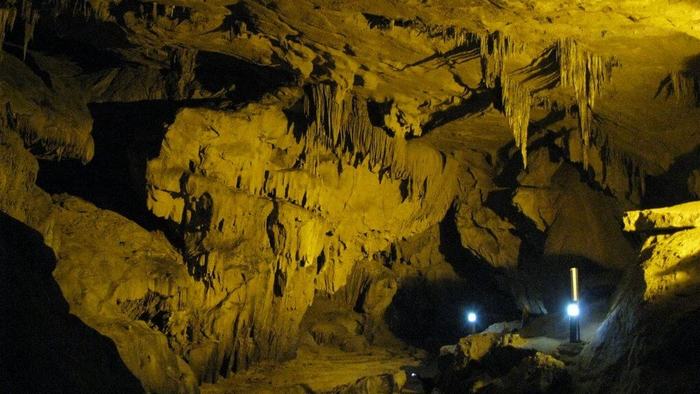 Perhaps mainly because of the mysterious natural beauty of Trung Trang cave in Cat Ba island, visitors who used to coming here thought that they were lost in the heaven of nature.

Located 13 kilometers from the center of Cat Ba town, on the way to the Cat Ba National Park, Military Hospital cave is located halfway up the mountain, in the Khe Sau area (Hai Son village, Tran Chau commune, Cat Hai district). Previously, the cave was named Hung Son, named after a Tran general who participated in the battle on the Bach Dang river. From 1963 to 1965, when American imperialists bombarded the North, the cave was built into a relatively modern military hospital, so the Cat Ba people called Military Hospital cave.

The Military Hospital cave is still intact all the internal structure of the past. With the exterior, people do not refurbish but still try to keep its pristine appearance. Visitors going to Cat Ba not only have the opportunity to admire the masterpiece from nature but also remember the historical story associated with the anti-war period of the national defense of our nation in the past.

Hoa Cuong cave lies in the range of the northeast mountains. The cave is the home of people living in Gia Luan commune, north of Cat Ba island, bordering with Halong Bay. It is also a ferry terminal linking with Tuan Chau, Quang Ninh province. The cave is placed at the height of about 15-20 meters compared to the living area and 50 meters above the sea level. The height of the cave is about 10 meters. The widest part of the cave is around 25 meters with about 100 meters in length. 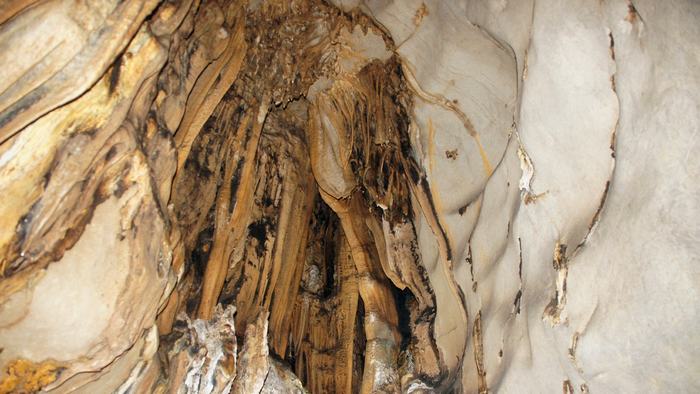 Right from the entrance to the cave, looking upwards, visitors will be impressed by the stalactites in all colors and shapes. This illusion is reflected more vividly thanks to the small lake distributed alternately under the floor of the cave. Hoa Cuong cave is not only famous for its breathtaking scenery but also is a place that has archaeological significance.

Phu Long cave still retains the original wild features because of no human impact. Coming here, visitors can quickly feel the masterpiece of creativity on stalactites with hundreds of different shapes and sizes. If the main entrance is quite narrow with the undulating stone blocks, inside the cave is the wide open space like the maze, challenging visitors to discover.

Phu Long cave is divided into three relatively separate areas by layers of wavy stalactites. Another exciting thing is that, if they want to reach the "third cave," visitors have to paddle under a shape of stalactite as a large turtle to come to two places which are Paradise on the left and Buddha palace on the right. This place is splendid with golden parasols, statues of god and fairy goddess, the four ghosts dwelling on a dragon stone, etc. Stalactites and human imagination create all of them.

Trung Trang, Military Hospital, Hoa Cuong, and Phu Long caves are the four most famous caves in Cat Ba. Perhaps because of the natural beauty without human impact, the caves here still retain their simple but different charms. If you like these Cat Ba caves, don’t hesitate to like and share with your friends to spend a wonderful weekend on the island. Thank you.